Resting at the confluence of the Indian and Atlantic oceans, situated between the slopes of the iconic Table Mountain and the glistening sapphire waters of the Atlantic and Indian oceans, the exceptionally scenic city of Cape Town is in a class of its own. Some cities boast rich culture, vibrant nightlife, a cosmopolitan atmosphere and extraordinary architecture, while others boast breathtaking landscapes and extraordinary natural wonders. Cape Town is fortunate to be blessed with all of these attractions and so much more. With its bustling harbour, world-class beaches, top-notch vineyards, and its mountainous surroundings brimming with diverse flora and fauna, Cape Town consistently captivates the hearts of all who visit.

Located along the well-known Route 62 in South Africa’s beautiful Klein Karoo, the charming town of Oudtshoorn is known as the ostrich capital of the world. It is surrounded by numerous ostrich farms and the golden arid landscape of the Karoo. Visitors can enjoy the locally produced wine and port; sample ostrich meat and biltong; learn about the ostrich feather boom at the C.P. Nel Museum; and visit the world-renowned Cango Caves, the largest cave system in Africa featuring ancient rock formations and sparkling stalactites and stalagmites. Other popular activities include: mountain biking, paragliding, horse riding, and taking a day trip to the quaint town of Prince Albert over the scenic Swartberg Pass.

Sandwiched between the towering Outeniqua Mountains and the Indian Ocean, Knysna is known as the ‘Garden of Eden’. It is surrounded by world-renowned forests, lovely lagoons and pristine beaches. Visitors can look forward to an array of markets offering delicious food and organic locally-made goods, explore the town’s picturesque waterfront and wander the quaint streets, adventure through the lush forest, skip over streams and catch a glimpse of the multicoloured Knysna Loerie, take a ferry trip to the famed Knysna Heads and sample the local oysters. Don’t miss the opportunity to enjoy a wide range of exciting activities including: surfing, swimming, yachting, jet-skiing, boating, fishing, and golfing.

Set along the spectacularly scenic Garden Route in South Africa, the coastal town of Plettenberg Bay is a popular holiday destination. The Portuguese explorers called it the 'Beautiful Bay', and it’s easy to see why – Plettenberg Bay is a picturesque, charming town with endless pristine beaches, tranquil lagoons, clean rivers, indigenous forests and a dramatic rocky peninsula. Playground to the wealthy, beach mansions overlook the Indian Ocean, often dotted with luxury yachts, while leisure time is given over to polo and golf, among other things. However, all kinds of visitors will feel at peace here as simply swimming in the warm water on a safe beach is a great way to experience the beauty of Plettenberg Bay.

Located between Port Elizabeth and Grahamstown and just east of Addo Elephant Park, the Amakhala Game Reserve is the perfect place to enjoy Big Five Safaris. Featuring spectacular topography created by the Bushman’s River, the reserve is home to a huge array of animal species - besides the big five, visitors can also spot cheetah, giraffe, zebra, wildebeest, plenty of antelope species, and many other smaller interesting animals. Amakhala also boasts fantastic bird watching opportunities (the majestic African Fish Eagle is a particular highlight), and idyllic boat cruises offer a delightful way to experience this. Visitors can look forward to a variety of fantastic game drives, guided walks, and horse trails. Just outside the park, there are plenty of attractions to discover, including the Amakhala Craft Centre, and the Bushman Sands Golf Course, and Health Spa.

Amakhala Game Reserve is an ideal choice for your Big 5 Safari destination.

This 8,500 ha reserve is renowned for its truly awesome topography, created by the slowly meandering Bushman’s River running through it.

Not only do we offer the much sought after Big 5, but there are over 16 antelope species, zebra, giraffe and many other small interesting species. Our elephant sightings are likely to be the highlight of your stay. In addition to game drives, we also offer boat cruises and guided walks. The Amakhala Heritage Collection of Lodges are each owner managed and unique, offering a wide variety of accommodation and personalized style. We are proud to offer you the superb Amakhala service and famous hospitality.

Guided by experienced rangers, you can return to nature and explore the diverse wildlife and the rugged landscapes of the Eastern Cape valley and bushveld on Amakhala Game Reserve.  This bush experience will create memories, which will linger as long as the African sun sets.

Morning and evening game drives in open Land Rovers through Amakhala Game Reserve will leave you in awe of the diverse vegetation and spectacular scenery which abounds here.  For a change of pace, enjoy bird watching and game spotting whilst gently cruising down the Bushman’s River.  Refreshment breaks have been included to make your safari experience that much more enjoyable.

Amakhala Game Reserve has been awarded the voluntary label by Fair Trade in Tourism South Africa (FTTSA).  Based on adherence to specific criteria such as fair wages and working conditions, fair distribution of benefits, ethical business practice, and respect for human rights, culture and the environment, the FTTSA label is an independent endorsement of fair and responsible tourism practise in South Africa.

Located on the eastern coast of South Africa, just outside of the port city of Durban, Umhlanga Rocks, also referred to as Umhlanga, is a popular seaside resort town. The tropical weather and lush vegetation make this an enticing holiday destination attracting visitors from all over the world. Umhlanga and its surrounds feature golden-sand beaches stretching over 200 kilometres, endless sugarcane fields and the rolling verdant landscape of the Valley of 1000 Hills. It is the perfect location for ocean enthusiasts and outdoor adventurers alike, with great opportunities for diving, swimming, scuba diving, whale watching, dolphin viewing, deep sea fishing and kiteboarding. Don’t miss Umhlanga’s excellent golf courses; they are a real treat for the avid golfer. 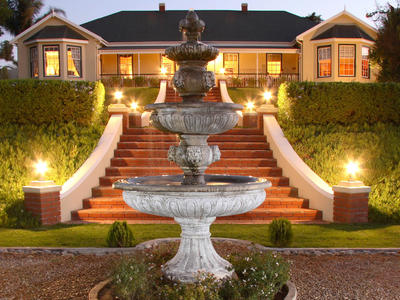 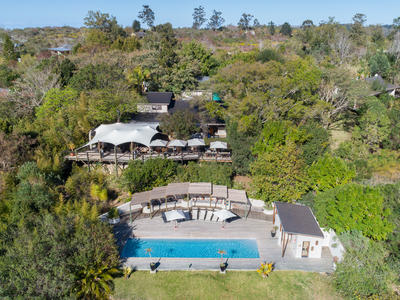 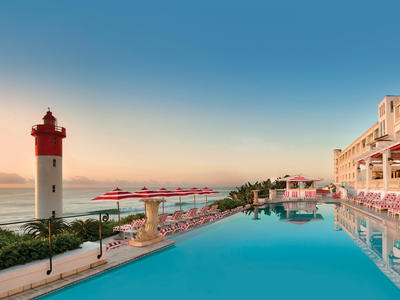 One of the most culturally and geographically diverse places on earth, South Africa, fondly known by locals as the 'Rainbow Nation', boasts 11 official languages, and its inhabitants are influenced by a fascinating mix of cultures. Discover the gourmet restaurants, impressive art scene, vibrant nightlife, and beautiful beaches of Cape Town; enjoy a local braai (barbecue) in the Soweto township; browse the bustling Indian markets in Durban, or sample some of the world’s finest wines at the myriad wine estates dotting the Cape Winelands. Some historical attractions to explore include the Zululand battlefields of KwaZulu-Natal, the Apartheid Museum in Johannesburg, and Robben Island, just off the coast of Cape Town. Above all else, its untamed wilderness is astonishing: wildlife roams freely across massive unfenced game reserves such as the world-famous Kruger National Park.

Banks are found in most towns, and are generally open from 09h00 to 15h30 on weekdays and 08h30 to 11h00 on Saturdays (Closed Sundays and Public Holidays). Most of them offer foreign exchange services - with cash, bank & credit cards as well as travellers cheques. You can also obtain cash from automatic teller machines (ATMs). Several international banks have branches in the main city centres. Always advise your bank that you are travelling outside of the country as they might block your purchases if they are not informed.

Travelling around South Africa is relatively easy by air, road and rail.

An extensive tarred road system makes travelling in South Africa by vehicle convenient and easy. You will find gravel roads in rural areas though. Please note that a valid international driver's licence is required. We drive on the left-hand side of the road. Most global car hire firms have branches in South Africa and Uber is available.

Another means of getting around South Africa are inter-city bus services. Metrobus buses are available for in-city transport. Metered taxis must be ordered by telephone.There is the popular MyCityBus system in Cape Town as well as a hop-on-hop-off tourist bus in Cape Town and Johannesburg.

The rail system includes the long-haul, inexpensive Shosholoza Meyl Metrorail trains and some more luxurious options are available. There is also the Gautrain rapid transit railway system in Gauteng Province.

Bring clothes that are cool, light and comfortable because summer temperatures can get well into the 30 - 40 degree Celsius range in some areas. Also bring an umbrella or raincoat during summer as this is when most of the country gets its rain, but don't forget a swimming costume (bathing suit).

The winters are generally mild, comparing favourably with European summers.  But there are days when temperatures dive, especially in high-lying areas such as the Drakensberg, so be prepared with jerseys and jackets. Cape Town gets its rain during the winter season so it’s advisable to bring rain gear along.

Always bring a hat, sunglasses and sunblock as the sun can be strong even in the winter months.

Walking shoes are a good idea all year-round, with warm socks in the winter.

If you are doing business in the country, business attire  (suit and tie) is generally called for in the corporate sector, but media for example generally dress more casually.

For game viewing, a couple of neutral-toned items will be useful, but there's no need to go overboard. A good pair of walking shoes is also advisable.

For the evening, if you are dining at an upmarket restaurant or seeing a show, smart-casual attire is recommended.

Standards of hygiene in relation to food health and safety in South Africa, are generally high in hotels, restaurants, pubs and nightspots. Tap water in South Africa is safe to drink and cook with when taken from taps in urban areas. Not all tap water in rural areas is safe for consumption, so take precautions if necessary.

It is safe to eat fresh fruit, vegetables and salads, and put ice in your drinks. South Africa's fish, meat and chicken are of excellent quality, so there is no need to limit yourself when enjoying the local cuisine.

Restaurants are subject to South Africa's food safety control legislation, which is implemented by local government.  Regulations include certification and regular inspections by health inspectors to ensure hygienic standards are maintained.

Street food is not as common in South Africa as it is in other countries, although vendors selling traditional snacks and meals can be found in city centres and townships. Food safety in such instances cannot always be guaranteed.

Electrical sockets in the Republic of South Africa are Type M (SABS-1661).  If your appliance's plug doesn't match the shape of these sockets, you will need a travel plug adapter in order to plug in. Travel plug adapters simply change the shape of your appliance's plug to match whatever type of socket you need to plug into. If it's crucial to be able to plug in no matter what, bring an adapter for all types.

South African temperatures, which are measured in centigrade, average at highs of 28°C to average lows of 8°C in the summer months while winter temperatures range from 1°C at night to around 18°C in the day.  Average annual rainfall is on the low side at under 500mm a year, making the country somewhat dry.  Much of the rain falls in the Western Cape in the winter, differing from the rest of the country, which experiences summer rainfall. On the plus side, the South African climate boasts more than its fair share of sunshine, recording an average of 8.5 hours a day.