As the capital of Cuba, Havana is a remarkably vast, sprawling metropolis. The city’s compelling history is reflected in the astonishing diversity of its architecture, its multicultural inhabitants, and its exotic and eclectic cuisine. The Old Town remains a remarkably well-preserved colonial centre. It is characterised by an exquisite hotchpotch of architectural styles, of opulence and decay, socialism and capitalism, the past and the present. Imperial mansions have been converted into modern tenement buildings, government agencies find homes in eighteenth-century convents and the nostalgic classic American cars for which the city is known share Havana’s lively streets with the latest models of BMW and Mercedes. While the UNESCO-funded restoration programme has introduced a modicum of modernity into the city, Havana has managed to retain its wonderfully quirky cultural heritage, its unique character, and its undeniable charm.

Visitors tend to come to Varadero for the uninterrupted 20-kilometre-stretch of white sandy beaches and stunning turquoise sea and stay for the colourful rum-filled cocktails and fabulously friendly locals. This elongated island is a relatively exclusive part of Cuba, abundant with private hotel resorts and the country's only full golf course. Varadero even has it’s own rather wonderfully cheesy Beatles bar complete with live rock music, an energetic atmosphere and life-size statues of the famous four standing guard at its front door. Whether you choose to marvel at the wildlife at the Varahicacos Ecological Reserve, stroll down the makeshift bar strewn walkways of Josone Park, or plonk yourself down in the sun on a deck chair with a mojito, this island paradise is a great place to take a break from the hustle and bustle of the dusty streets of Cuba. 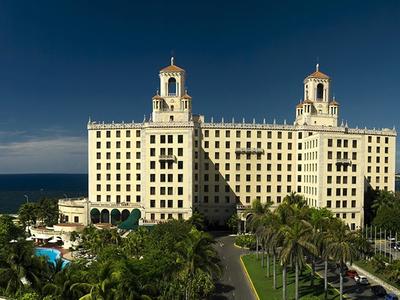 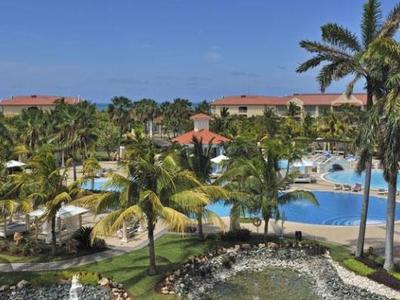 Cuba’s turbulent past and defiant political stance have imbued it with an undeniable mystique - but beyond its historical intrigue, there’s plenty more to discover and enjoy about this unique travel destination. The island is like one of its ubiquitous vintage cars - shabby but chic, erratic and unpredictable, and ultimately loveable. Fine cigars, salsa dancing, Afro-Latin beats - all these things and many more contribute to Cuba’s one-of-a-kind flavour. Highlights include the glittering capital city, Havana, where you can dance the night away in salsa clubs, or marvel at the crumbling beauty of colonial buildings on a stroll through town; the laid-back little town of Vinales, surrounded by tropical landscapes studded with bulbous limestone karsts; the terracotta buildings of historical Trinidad; and picture-perfect beaches at Varadero, and on the islets of Cayo Guillermo and Cayo Largo del Sur.

Note: US Dollars are no longer accepted in Cuba and visitors will be charged 10% commission on exchanging them. In the 1990s, Cuba decided to slowly get rid of its Dollar reserves, banning the currency from general use and introduced the replacement CUC as a convertible currency under its control. CUCs cannot be purchased or exchanged outside of Cuba. Cuban nationals continue to be paid in the Cuban Peso (CUP; symbol CUP$ or $). In some tourist areas, the Euro is also accepted. Hard currency (ie CUCs not CUPs) must be used in most transactions. As of March 2011, 1CUC=1USD.

The import and export of local currency is prohibited. The import of foreign currency is unlimited, subject to declaration of funds exceeding US$5,000 on arrival. Export is allowed up to the amount imported and declared.

Money should be exchanged at banks or state-run CADECAs. Dollars attract a 10% surcharge on top of the normal commission (US citizens should bring Euros or Sterling to exchange). All local currency must be exchanged again before leaving the country. Card transactions attract a surcharge (of up to 12.5%)

MasterCard and Visa credit cards are increasingly accepted, provided they are not issued by a US bank, or a bank with links to the USA, but hefty fees are often added. ATMs are fairly common but not ubiquitous. However, cash can be obtained in banks and Cadecas with non-US Visa credit and Visa debit cards.

Perhaps one of the most important parts of planning a trip to Cuba involves figuring out exactly how you'll get around once you're there.

Renting a vehicle in Cuba is relatively easy and common among tourists. If you choose to go this route, however, there are plenty of things to keep in mind first if you want to remain in one piece on the road.

All car hire companies are state-owned. Prices are negotiable up to a point, but expect to be delayed when picking up the vehicle. It may be easier and has proven to be cheaper to book car hire through a specialist tour operator in your own country.When picking up the car, be sure there is a spare tire and jack, and consider snapping a date-stamped picture of any existing damage to avoid disputes upon drop-off. A valid national driving licence will be required.

By most accounts, driving in Cuba can be rough. This is due in part to the poor conditions on many secondary roads, which can be narrow, winding and riddled with potholes. Add to this the lack of adequate street signage and you've got a confusing and potentially dangerous situation.

Driving at night can be particularly risky since many roads are poorly lit (or not lit at all). Additionally, it's not uncommon to come around a bend and find pedestrians, cyclists or even livestock in the road, so drivers should exercise caution.

Another thing to look out for is traffic lights, which are often placed to the far corner of intersections. This can be hazardous because if you're not expecting to come upon one, you may find yourself stopped dangerously in the middle of the crossing.

Knowing the dangers of actually getting behind the wheel in Cuba, it's not surprising that many tourists choose to use taxis to get around instead. There are certainly plenty available for hire, but should you choose this particular mode of transportation, take into account the following so that you do so safely. First and foremost, avoid taking rides with unlicensed taxis. They are often driven by thieves who are out to pick up and rob passengers. Be particularly careful of fare amount when hiring a taxi, especially in Havana.

If possible, ask someone who is native or at least familiar with the system how much the fare should be prior to heading to your destination. This way you will know beforehand how much the driver should be charging you and can avoid be scammed out of an exorbitant fee by a dishonest driver.

If you can't confer with a local, insist that the meter be used to remove any doubt.

One of the more unique types of transportation in Cuba is the "Co-Co" taxi, a three-wheeled vehicle that is generally yellow in color and contains a flimsy hood. These are basically just glorified motorcycles that have been modified to carry passengers.

Because they can reach speeds of up to 40 mph and lack any sort of safety features, including seatbelts, "Co-Co" taxis can be pretty dangerous.

They are, nevertheless quite popular with tourists so if you choose to ride on one, be aware of the risk.

The lack of traffic makes Cuba a popular choice for cycling tours. Bicycles can be rented in Havana from a number of bike hire companies.

There are a number of options when it comes to bus travel within Cuba. Many are specifically designated for tourists and travel conveniently within and between cities.

This mode of transportation is pretty reliable and clean, although some of the more heavily used buses are beginning to show their wear.

One thing to keep in mind when selecting bus as a mode of transportation is that they can be quite crowded and therefore can be haven for pickpockets. Keep your valuables well concealed and bags zipped and stored in front of you, just in case.

Travel by train is not the most reliable form of transportation in Cuba, mainly due to the lack of quality equipment. Still, there are a few dependable train lines that run between Havana and Santiago de Cuba.

There are also additional lines throughout the country with stops at Camagüey, Santa Clara, and the cities of Manzanillo, Cienfuegos, Sancti Spiritus, Pinar del Rio and Morón. Keep in mind that while a few trains offer first class options, none of them provide sleeper cars.

Additionally, food and drink are not typically served so plan accordingly. With the poor equipment quality of many of the trains, you may find yourself stuck for hours awaiting the car's repair. And while aboard, be sure to keep a close eye your belongings. Luggage is frequently stolen from train cars in Cuba.

The only destinations in Cuba serviced by water routes are Isla de la Juventud on a daily ferry from Batabanó south of Havana, and Cayo Levisa, as part of accommodation packages to that key off the northern coast. Additionally, there is a commuter ferry crossing Havana harbour several times daily between Havana and Casablanca.

Cuba is a sub-tropical country so pack for summer. Bikinis, shorts, sandals, short-sleeved cotton dresses and shirts are the order of the day. A night out at Tropicana or La Guarida restaurant needs something smart if not overly formal.

Bring some warm clothing (long sleeves, a sweater or fleece), since there is nothing more frustrating then being frozen to death in a tropical country! Lightweight rain gear is suggested if you are coming in the summer.

Tap water is not safe to drink. Bottled water is ubiquitous, but boiling water is recommended to limit plastic waste. Milk is pasteurised and dairy products (with the exception of some cheap ice creams) are safe for consumption. Local meat, poultry, seafoods and fruit are generally considered safe to eat.

Surprisingly for an island so rich in marine life, fish and seafood rarely top the menu - most seafood is exported. Cuisine is a mix of Spanish and Afro-Caribbean, heavily reliant on rice, beans, chicken and pork. Depending on the season, fresh vegetables may be hard to come by - as a rule, the hotter the month, the more limited the selection. Furthermore, flavours are limited by the lack of available herbs and spices and many visitors are surprised that Cubans shun spicy food of all kinds. Food preparation relies heavily on the frying pan and deep fat fryer. Some of the best cooking, and often an illegal lobster or two, is found in paladares (small, private restaurants). In state-run establishments, service can be painfully slow and sometimes even surly.

A 10% tip on restaurant bills is common.

Generally Cuban electricity is 110V with the square American plug socket. Some hotels have 220V and round sockets.

Simply put, Cuba has a fantastic climate for adventurers, travellers and tourists alike. Cuba can be described as moderately subtropical with 2 seasons. The dry season, which runs from November to April is less humid and cooler, with average highs of 26-29C and lows of 18-20C. Summer temperatures average 32C with high humidity. The average water temperature is a very comfortable 25C along the coast.

Hurricane season in Cuba is between June and November, with most storms occurring in September and October.

If you are planning to travel to Cuba during Hurricane Season, Locally Sourced Cuba Tours still operates, however itineraries are subject to change during these months.